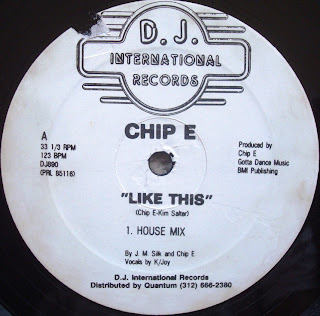 DJ890
A few different Chicago singles have been cited as the “first” house record. All of the top contenders for this title are associated with Jesse Saunders. There’s Single Girl by Knight Action, two separate Z-Factor songs, Fantasy and I Like to Do It In Fast Cars as well as Jesse Saunders’ own On and On. There’s a case to be made for all of these but in each case it is only in retrospect that these records are considered “House Music”. Without a doubt the first record that consciously called itself House was the 1985 Jack Trax EP by Chip E. This release included the legendary Time to Jack as well as another tune called simply It’s House.

It makes sense that Chip E. would be the first use the word House on record. At the time he was working at the influential record store, Importes Etc. in Chicago’s South Loop. Most dance music historians agree that the term House music was solidified here when employees, in an effort to help customers find the songs they had been hearing, began labeling music played by Frankie Knuckles at his club the Warehouse with the tag “As heard at the Warehouse”. This label was soon shortened to simply “House”. By 1985 the term began to describe all of the local music scene and a new genre was born.

Like This was Chip E.’s second release and it firmly established him as one of the city’s top producers. It is a perfect example of the early house sound with its prominent bassline, thumping 808, and stuttering vocal samples.  (In a 2010 interview, Chip E. revealed that the "like this" sample is actually Frankie Knuckles' voice)  Like This was also one of the first releases from Rocky Jones’ DJ International label. Along with Trax, this imprint became synonymous with the early sound of Chicago House.

Songwriting credit here is given to Chip E. and Kim Salter (the vocalist also known as K/Joy) but further down on the label, credit is also given to J.M. Silk (aka Steve “Silk” Hurley).  The label shown here is actually the less common variant with Chip E.'s name displayed prominently. Most copies showed K Joy as the artist. Both versions share the same catalog number.  Later re-releases changed the artist line to Chip E. feat. K Joy. 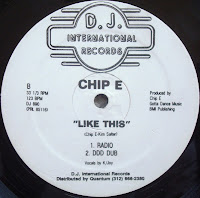 Side A
House Mix

Side B
Radio
DDD Dub

side A&B
Posted by freesoundcollective

This blog was created to share classic tracks from the golden era of Chicago House music that are now hard to find or, in some cases, commercially unavailable. Work the Box is focused on Italo, Hi-NRG, Acid, Disco, and Chicago House from the 80's although other styles and decades will popup.

Most of these posts are vinyl rips from my own collection. Contact me in the comments if you have requests or just to let me know what you like. I'll be concentrating on full rips @320kbps of 12" singles but may occasionally include an album or two. I hope this project introduces you to some great tracks or reminds you of a classic track that you'd forgotten.

Please support artists and local retailers by buying as much music as you can. I will comply with any request from copyright holders to remove a post.